There are multiple methods of making a casing for elastic or a drawstring, and you often have to see the pattern pieces/ instructions to find which one is used.

Casings/ bands/ bindings on the edge of fabric

These are very basic key construction techniques to know, as similar methods are used for finishing edges by making hems, casings, neckbands, plackets, waistbands, pocket bands, and sleeve cuffs. Bias binding and Hong Kong finish (post from Closet Core patterns), and bias strip facing, are also similar but without the inner space for the elastic/drawstring or width for the band.

I find it amazing and fascinating how so many techniques are interrelated 😀
Putting them together, with diagrams showing a cross section through the fabric, makes it obvious that when you can do one, you can do others by adding/ changing a couple of steps !
They are similar in principle, though they may feel very different to make in practice, due to the size, thickness, and stiffness of the materials used.

Foundation techniques :
sew : plain seam, stitch-in-the-ditch (photo tutorial with video from Tilly and the Buttons), hem/ edge-stitch (note from SewGuide). Both are satisfyingly easy when you have an edge-stitch presser foot.
press : press folds of specific width – can be done quickly and easily by pressing over a template marked with widths. I use a hand-made one, which is simply a strip of card marked with widths.
Those techniques really are all you need 😀

When these methods are used for bands, often the fabric for those has added support given by interfacing, so they can keep their shape as they are in high-stress areas. There is special easy-fold interfacing which can be used for waistbands and straps (several widths).

The most ‘beginner’ way of making a casing for waist elastic on pants uses a pattern which has more length of fabric between waist and crotch. So you can make a casing simply by folding over the top edge.
Similar to sewing a hem. Double fold casing is like a double fold hem. 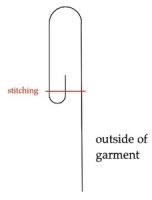 The simplest method of adding a separate casing/ band is to double the added strip before attaching it. Much used on beginner quick and easy patterns, especially to add bands to knits, but does not always give a neat (or comfortable non-rubbing) result inside the garment (diagrams in cross section again, and with outside of the garment to the right).

much used for neck, cuff, hem bands on knits

Here are some neater methods for adding a separate casing/ band to woven fabrics.

The first stitching attaches a single layer of casing/ band fabric, right sides together to the outside of the main fabric.
Then the added fabric is pressed over the seam allowances.

Next the raw edge of the casing/ band is folded in.

The raw edge may be finished (e.g. with overlocking, bias binding, Hong Kong finish).
Then that edge is held down, usually by stitch-in-the-ditch next to the folded edge at the first line of stitching.

This is a good casing method to use with bulky fabrics. (And made without the space above the seam allowances, it’s the same as Hong Kong seam finish.)

Or the turned-in edge is folded before being stitched.
I think this gives a neater result. (And without the space it’s the same method for bias binding.)

When this technique is used to make a neckband, waistband, sleeve cuff, pocket hem band, main garment hem band, or quilt binding, the ‘couture’ method is to stitch the fold in place by hand. Using some sort of hem stitch, preferably hidden.
I remember a contestant winning a ‘luxury’ round in The Great British Sewing Bee by finishing the neckband of her silk robe by hand !

An extra finish to bands is much liked by people with tailored-classic or edgy style – add edge-stitching close to the folds. For a softer look, use one of the decorative stitches on your machine.

Fold the added fabric entirely to the back

Another version of this added strip casing folds the extra fabric entirely to the back, such as :

This method is related to adding a bias strip facing.
Reverse the technique, so the added fabric is entirely on the outside of the garment, and that makes a featured facing trim to a garment edge. 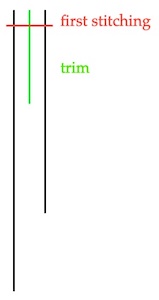 Fold the added fabric to the back, and the trim protrudes at the edge.

Casings in the middle of fabric

Two more options, more for the middle of the fabric.

The simplest is just two lines of stitching which make a channel between two layers of fabric.
This is one version of what that might be like, in cross section.

from the Wardrobe By Me Norma Jean robe

If you don’t want to faff with pressing the edges of a fabric strip, use tape or ribbon at least 3/8″-1cm wider than your elastic.
Though there are aids for easy pressing, see top of post.

Examples of using casings for styling

An applied casing can be on the right or wrong side of the fabric. Here’s an example from Cal Patch using one to give casual waist definition to a dress. 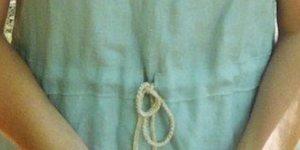 Such casings can also be used to gather in unexpected places, as in the Teah dress from Tina Givens.

I have a favourite parka pattern, oop Simplicity 2153, which shows many ways of using casings for both function and decoration. 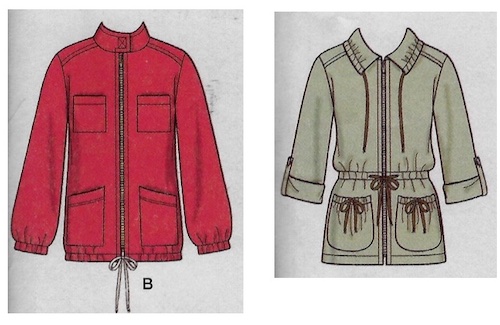 There are many different versions of these options, with slight changes.
A bit daunting to try to settle down and learn all of them in one go, so just use them as you come across them in your making 👍 😀 👍

Have you any comments or suggestions ? Cancel reply

Beginners from start - not free